Here I want to show some theoretical aspects using NTP over a network connection which has different delays in both directions. This is typical given with ADSL. Before continuing reading here you should read my first blog about NTP and ADSL. 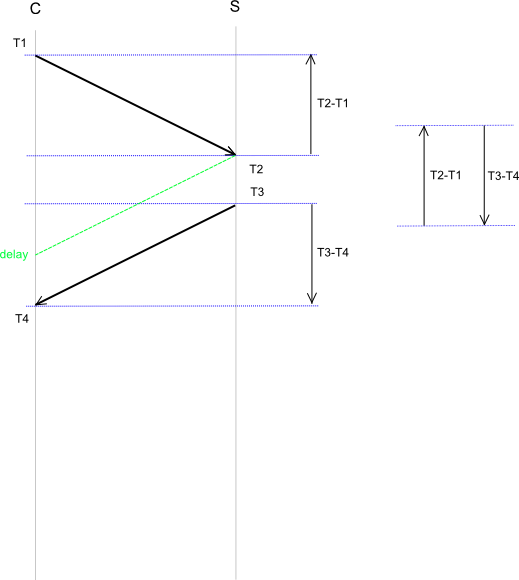 we get the result 0.

Now the non symmetrical situation as it is given with ADSL for example. This ntp frame reaches the server later based on the lower upload rate in opposite to the higher download speed. We can say

And “x” is the additional delay given by asymmetry. 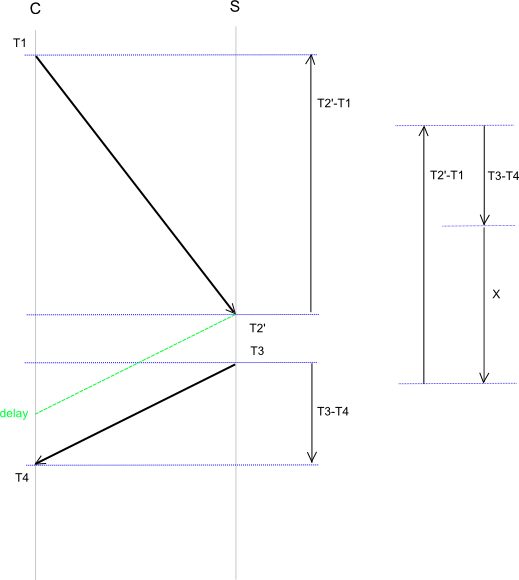 The formula for offset is now

We can set this value to 0 as we know both time server are in sync. Rewriting the mathematical formula we get

for the additional delay.

I tracked the packet with “tcpdump” running “ntpdate -d -d -d -d -u ip.address” and got the following values:

Doing the math to verify the results I got

Splitting x into two parts each 50% we have the symmetrical situation. And of course ‘ x / 2 = offset ‘ respectively ‘ x = 2 * offset ‘. This is not really surprising as the formula for “x” is coming out of the formula for offset. It is quite similar. Some signs are different and we lost factor 2. But it is also what we have seen in my previous blog.

So we know the additional delay is twice the offset we see with “ntpq” for a 90 byte UDP packet. But even with a symmetric connection to the internet there are a lot of components which produces different delays from A to B and from B to A. Therefore we never know how accurate our time information is.